Can I Sue for an Infection from a Heater-Cooler Used in Heart Surgery?

If there is evidence connecting your infection to the heater-cooler device, then you may be able to sue for compensation. Our attorneys have decades of experience handling cases where people have become sick from infectious diseases. We can help answer your questions and provide information about whether you have a case.

Also known as Nontuberculous Mycobacterium (NTM), these M. chimaera cases are associated with the LivaNova (Sorin) Stockert 3T device. Infections caused by the use of these heater-cooler units during heart surgery have continued to happen over and over, even though the risk is known and preventable.

Contact our law firm about a heater-cooler lawsuit if you developed an infection after heart surgery. Ask a lawyer about getting compensation for the harm you suffered. Our lead lawyers for these cases are Raymond Trueblood-Konz and David Szerlag.

Heater-cooler devices are used during cardiac surgery to warm or cool a patient. The FDA and CDC have issued health alerts stating that bacteria can grow in a water reservoir that is part of the heater-cooler design. Studies have found that deadly bacteria can become airborne (aerosolized) and enter a patient’s open wound during heart surgery.

The Pritzker Hageman infectious disease lawyers have won millions for clients injured by medical products. To contact our legal team, submit the form on this page or call our law firm at 1-888-377-8900.

Invasive infections due to nontuberculous Mycobacteria chimaera have been identified in patients after open chest surgery using the LivaNova (Sorin) Stockert 3T heater-cooler device manufactured by Liva Nova PLC (formerly Sorin Group Deutschland GMbH). According to the Minnesota Department of Health (MDH), these infections have been diagnosed up to 6 years after surgery.

Mycobacterium can cause fatal infections (see below). There have been several outbreaks at hospitals that used heater-cooler devices during open-heart surgery. Below are some of the cases that have been reported in the United States.

Mercy Medical Center in Des Moines, Iowa, notified about 2,600 patients whose open-heart surgeries took place between July 1, 2012, and July 1, 2016. As of August 24, 2016, Mercy was aware of two patients who had been diagnosed with a Mycobacterium infection.

Penn Presbyterian Medical Center sent a letter to patients who underwent certain cardiac surgeries at that medical center between October 1, 2013, and December 17, 2015. The letter stated that the CDC and FDA had notified hospitals of the risk of infection “linked to certain heater-cooler devices used in conjunction with the cardiopulmonary bypass machines during cardiac surgeries.”

The bacteria causing the infections is Nontuberculous mycobacterium (NTM).

The letter acknowledged that 4 Penn Presbyterian Medical Center patients who had heart surgeries during the time stated above were diagnosed with NTM infections. These patients developed an invasive NTM infection following heart surgery with an open chest using a heart/lung bypass machine. These types of surgeries include coronary artery bypass graft surgeries, valve surgeries, and surgical procedures involving the thoracic aorta.

Penn used the implicated heater-cooler device between October 2013 and December 2015. It is no longer using this device.

Penn State Health notified 2,300 patients who had open-heart surgery at Penn State Milton S. Hershey Medical Center that they may be at risk for an NTM infection caused by the use of a heater-cooler device, which was no longer used after a problem was suspected.

Penn State Health has acknowledged that three patients who had open-heart surgery at Milton S. Hershey have been diagnosed with nontuberculous mycobacteria NTM. These 3 patients had surgeries between November 5, 2011, and November 5, 2015.

University of Iowa Hospitals and Clinics

UI Hospitals and Clinics in Iowa City stated in a press release that one of its patients was diagnosed with Nontuberculous Mycobacterium (NTM) after surgery using a heart/lung bypass machine with a heater-cooler device. The clinic stated that it was, at the time, exceeding manufacturer guidelines for disinfecting and maintaining these devices.

WellSpan York Hospital has sent letters to about 1,300 patients who may have been exposed to non-tuberculosis Mycobacteria during open-heart surgery. The letters recommend that patients consult a doctor if they suspect infection with this pathogen within 4 years following the date of the most recent open-heart surgery. This 4-year period is important because the incubation period for this species of Mycobacteria chimaera, is very long. In one case reported in the medical literature, a person exposed to this pathogen did not have an onset of illness for 3.6 years (Sax).

As of September 2016, WellSpan York Hospital, working with the CDC and Pennsylvania Department of Health, had confirmed 12 cases of Mycobacteria infections (WellSpan FAQ). The hospital has acknowledged 2 additional cases where the patients died before the infection issue was identified. These 2 patients had symptoms consistent with this infection.

The open heart procedures involved with this outbreak include surgery to treat an aortic valve defect and coronary bypass surgery. According to WellSpan, “there is a limited risk of infection for patients who underwent open-heart surgery at WellSpan York Hospital between October 1, 2011, and July 24, 2015.” The reason for the risk is that a heater-cooler device was used during these surgeries.

The California Department of Health received reports of 2 patients with Mycobacteria chimaera infection who underwent cardiothoracic surgery using a Sorin Stockert 3T heater-cooler device in a California hospital in 2014 and 2015.

“One specific type of heater-cooler unit, the Sorin Stockert 3T, has been associated with Mycobacterium chimaera infections, and there is evidence that some of these HCUs produced before September 2014 may have been shipped from the factory contaminated with M. chimaera, a slow-growing NTM. The median time from surgery to diagnosis of M. chimaera infection has been reported as 21 to 30 months. However, the full duration of risk remains undefined, and some unpublished infections may have been diagnosed closer to 6 years after surgery” (MDH).

“There may be an increased risk of NTM infections among patients that received a prosthetic heart valve, graft, ventricular assist device, or other prosthetic material” (MDH).

MDH has not named the facilities that are investigating infections. Hospitals that do cardiac surgery in Minnesota include St. Mary’s (Mayo Clinic) and University of Minnesota.

Test results for Mycobacteria can take 8 weeks because the species involved in this outbreak, Mycobacterium chimaera is an extremely slow-growing pathogen.

Adults and children, including babies, can contract this infection. Symptoms of M. chimaera NTM infections associated with exposure to heater-cooler units include the following:

These NTM mycobacterium infections can involve the following:

For patients identified using the criteria above, the CDC recommends that hospitals assess for a history of surgery requiring cardiopulmonary bypass prior to diagnosis of NTM infection.

There has also been a Legionnaires’ disease outbreak associated with the use of heater-cooler devices.

At least four cardiac patients at the University of Washington Medical Center contracted Legionnaires’ disease, a severe form of pneumonia. Two of these patients died. An investigation initiated by hospital officials after the diagnoses revealed the presence of Legionella, the bacteria that causes Legionnaires’ disease, in three medical devices used to heat and cool patients during heart surgery. These particular devices were manufactured by CardioQuip, headquartered in Bryan, Texas. The bacteria was also found in an ice machine and two sinks at UW Medical Center’s Cascade Tower.

Our law firm is one of the few in the nation that has won several Legionnaires’ disease settlements. We have the experience needed to help you win a lawsuit for Legionnaires’ pneumonia. 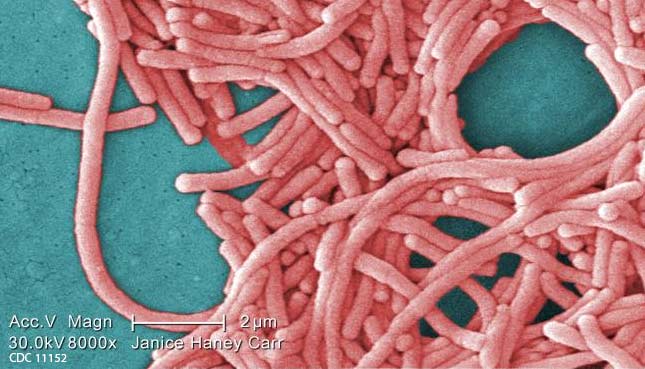