The people sickened ranged in age from 1 to 76 years old with a median age of 26. Eighty percent of the patients were female. State and local public health officials interviewed people about the foods they ate in the week before they got sick. Of the 13 people interviewed, 11 reported eating spinach.

Symptoms of an E. coli infection, which include abdominal cramps and diarrhea that can be bloody, usually develop within three days of exposure. The people sickened in this outbreak reported the onset of symptoms on dates ranging from October 13, 2021, to November 8, 2021. 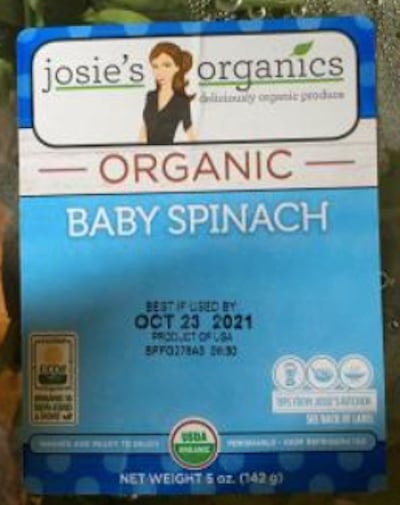 Whole genome sequencing tests performed on the E. coli cultured from each of the patients show the strains are closely related indicating people in this outbreak got sick from the same food. Health officials in Minnesota collected leftover Josie’s Organics baby spinach from a patient’s home. The product had a “best by” date of 10/23/2021. It tested positive for E. coli O157. Whole genome sequencing is being performed on the E. coli found in the spinach to see if it matches the strain cultured from the patients. Updated December 3, 2021-This post was originally published on November 15, 2021. It was updated on December 3, 2021, to reflect an increase in illnesses, hospitalizations, HUS cases and states