The ongoing queso fresco outbreak is spotlighting the tremendous risk Listeria poses to pregnant women, especially those who are Hispanic.

Pregnant women are 10 times more likely than the general population to contract listeriosis, 24 times more likely if they are Hispanic. And, among pregnant women, these infections can cause miscarriage, stillbirth, premature birth, and infection in newborns even if the expectant mother experiences only mild illness.

This outbreak, linked to cheeses produced by El Abuelito of Paterson, NJ, has sickened 11 people, one of whom has died, according to the latest information from the Centers for Disease Control and Prevention (CDC). Two of the illnesses are pregnancy-associated and include a newborn and a pregnant woman who are unrelated, a CDC spokesman told Food Poisoning Bulletin. Like all but one of the patients sickened in this outbreak, the pregnant woman and the newborn are Hispanic.

Cheeses, especially soft cheeses, are a common source of Listeria outbreaks. Of the 21 Listeria outbreaks the CDC announced between 2011 and 2021, eight were associated with cheese. No other food was linked to even half that number. Ham/deli meat, the second most commonly cited food source, was linked to three outbreaks. The rest of the foods were each associated with one outbreak. 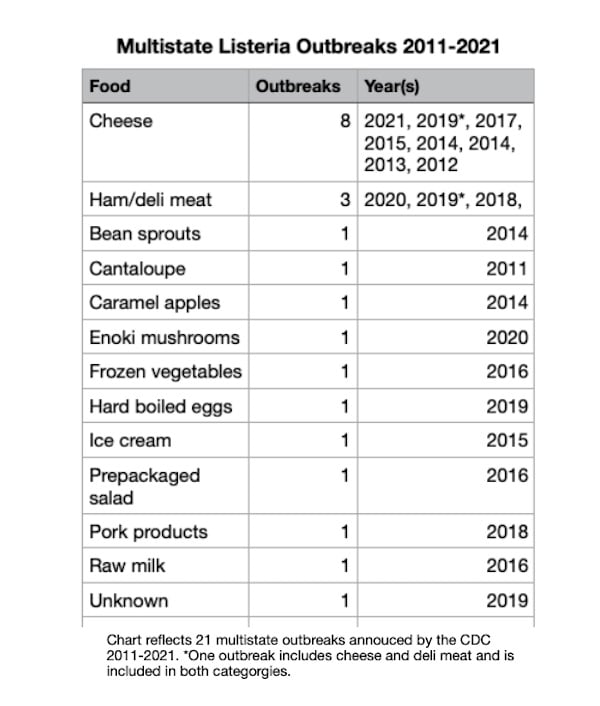 Why Are Pregnant Women at High Risk?

For years, it was thought that pregnant women were at elevated risk for Listeria infections because their immune systems were suppressed.  But researchers at the University of California, Berkeley found that when a pregnant woman eats food contaminated with Listeria, the bacteria makes its way to the placenta where it can hide from the immune system multiplying in great numbers before invading the rest of the body.

Symptoms of a Listeria infection include fever, headache, chills, muscle aches, loss of balance, diarrhea and upset stomach. Usually, these symptoms develop within two weeks of exposure but sometimes they can take as long as 70 days to appear. The people sickened in this outbreak said they first began experiencing symptoms on dates ranging from October 20, 2020, to February 14, 2021.

If you or a family member are part of this outbreak and would like a free consultation with our experienced team of Listeria lawyers, please contact us today by calling 888-377-8900 (toll-free), texting 612-261-0856, or by completing the form below.