While state and federal health officials work to identify the food source of a 15-state Salmonella Newport outbreak, a look at previous outbreaks reveals a wide variety of foods have been linked to outbreaks caused by that strain.

Symptoms of a Salmonella infection include abdominal cramps, diarrhea and fever. In cases where the infection enters the bloodstream, serious complications can arise.

In 2019, a 30-state Salmonella outbreak linked to ground beef produced by JBS Tolleson sickened 403 hospitalizing 117 of them. JBS issued a recall for six million pounds of ground beef that affected more than 100 retailers.

In 2018, 27 people were sickened in an outbreak linked to imported frozen shredded coconut. There were two strains of Salmonella involved: Salmonella I 4,[5],12:b:-  and Salmonella Newport  Coconut Tree Brand frozen Shredded Coconut, distributed by Evershing International Trading Company, was identified as the source.

In 2017, a Salmonella outbreak linked to imported Maradol papayas sickened four people, hospitalizing two of them. Two strains were involved: Salmonella Newport and Salmonella Infantis. The outbreak was one of eight that has been tied to papayas imported from Mexico since 2011. The U.S. Food and Drug Administration (FDA) has since issued two letters to the papaya industry in Mexico about improving food safety.

In 2014, a cucumber Salmonella Newport outbreak sickened 275 people from 29 states and Washington D.C. The grower, whose name was not released, was located on Maryland’s Eastern Shore.

In 2012, 261 people were sickened in a Salmonella outbreak linked to cantaloupe melon. There were two outbreak strains: Salmonella Typhimurium which sickened 228 of the patients and Salmonella Newport which sickened 33 people. The illnesses were reported from 24 states. Ninety-four people were hospitalized, three of them died. The cantaloupe was produced by Chamberlain Farms Produce, Inc. of Owensville, Indiana,

Pritzker Hageman Salmonella lawyers have recovered millions for clients nationwide including a landmark verdict in a Salmonella case.

If you have been sickened or hospitalized and would like a free consultation with our experienced Salmonella Legal Team, please call 1-888-377-8900, send a text 612-261-0856, or complete the form below. There is no obligation and we don’t get paid unless we win. 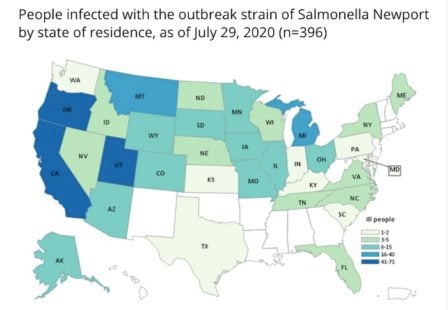