A string of recent flour E. coli recalls and outbreaks are evidence of the risk that raw flour poses to home cooks and bakers. Flour that is contaminated with E. coli can cause illness by cross-contaminating kitchen counters, mixing bowls, cutting boards and utensils. People can also get sick when they taste batter or dough.

What Kind of Risk Does E. coli Pose?

E. coli bacteria live in the intestines of humans and animals. Most types of E. coli are harmless and perform a vital role in a healthy digestive system. But some strains, those that produce a poison called a Shiga toxin, can cause serious illness and death.

Shiga-toxin producing E. coli (STEC) are found in the intestines of ruminant animals such as cattle, sheep, goats, elk and deer. STEC shed in the stool of these animals can spread disease to plants and other animals. Meat can become contaminated during slaughter. Cattle are a major source of human illness.

Eating food that is contaminated with E. coli can cause an infection. Symptoms of an E. coli infection develop within one to five days of exposure and include abdominal cramps and diarrhea that is sometimes watery or bloody.  Teenagers and young children with E. coli infections are at heightened risk for developing a life-threatening complication called hemolytic uremic syndrome (HUS), a form of kidney failure. How Does E. coli Get Into Flour?

Flour can become contaminated with E. coli or other foodborne bacteria such as E. coli during processing or while the wheat, or other grain, is growing in the field. The only way to kill it is to cook food to an internal temperature of 160˚ F. 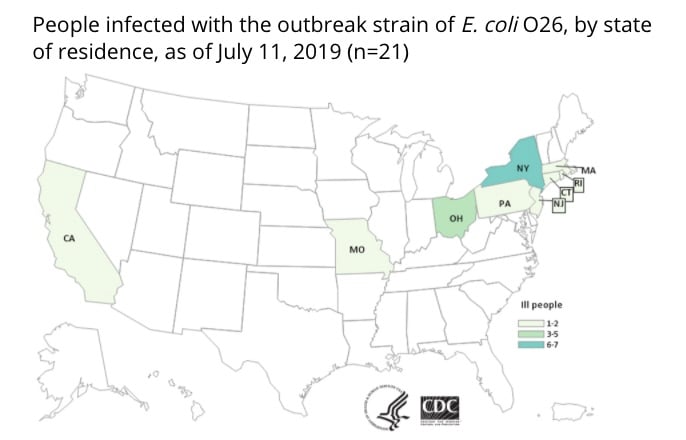 Three months after this outbreak ended, ADM issued another recall for flour contaminated with E. coli. On October 3, 2019,  the company said it was notified by the U.S. Food and Drug Administration (FDA) that samples of flour from two production lots manufactured at its mill in Buffalo, NY tested positive for E. coli O26 and that the strain was the same one linked to the outbreak months earlier.

The E. coli lawyers at Pritzker Hageman represent clients nationwide who have been sickened by contaminated food. If you developed an E.coli infection and would like a free consultation with our experienced team, please call 612-338-0202, text 612-261-0856, or fill out the form below.