An E. coli O157:H7 outbreak linked to romaine lettuce has sickened 35 people in 11 states, according to the Centers for Disease Control and Prevention (CDC). The number of illnesses has doubled since the outbreak was first reported three days ago and many of them are serious. So far, twenty-two people have been hospitalized, three of whom have developed hemolytic uremic syndrome (HUS), a form of kidney failure.

The CDC is advising consumers nationwide to throw away any store-bought romaine lettuces they have at home including salads and salad mixes containing romaine grown in Yuma, AZ. Specific products or brands that may be affected have not yet been identified but the agency has determined that the tainted greens were grown in Yuma, AZ. Consumers who want to buy romaine lettuce products or order them at restaurants should make sure they were not grown in this area.

Restaurants are also being advised not serve chopped romaine from this growing area. A traceback investigation is underway to determine the source of the romaine lettuce that was supplied to restaurants where some of those who became ill ate. 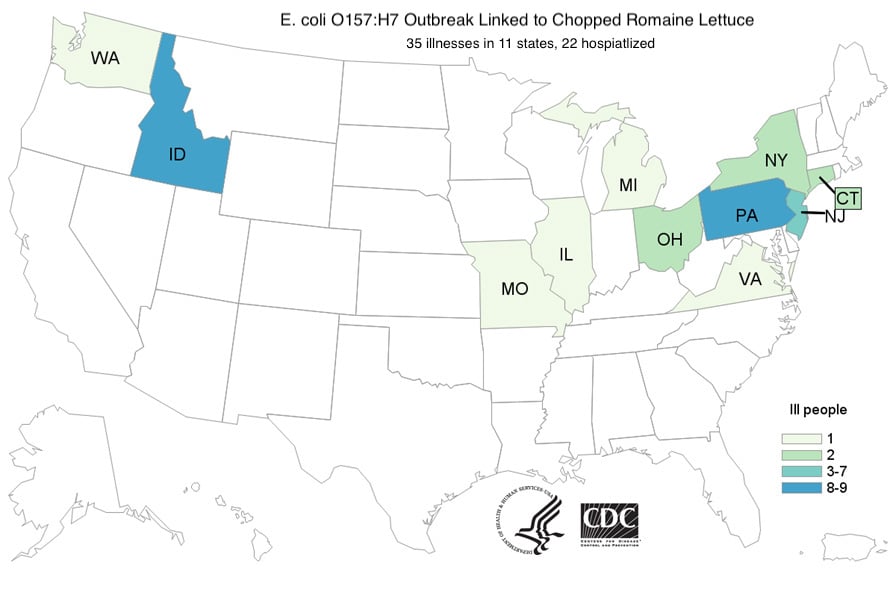 As a result of the outbreak, Freshway Foods issued a recall for “select chopped romaine lettuce sold at Schnucks Delis and Salad Bars,” according to recall information posted on the grocery company’s website. Products sold at Schnucks affected by the recall include:

Based in Sidney, OH, Freshway Foods is a wholesale food distributor that processes, packages and ships chopped vegetables.

In a recall issued April 14, Giant Eagle voluntarily recalled 37 products containing the recalled shopped romaine lettuce sold at is Giant Eagle, Market District and GetGo stores. At the time of the recall, the company said it had not received any reports of illnesses. The recalled salads, boxed lunches and wraps were packaged in clear, plastic containers and sold in the catering, restaurant and salad bar areas of stores from April 9 to April 13.

On April 14, Fresh Foods Manufacturing Co. issued a recall for 8,757 pounds of ready-to-eat salads that may be contaminated with E. coli O157:H7. The recall came one day after the company received word from a produce supplier that the romaine lettuce used in the production of those products was being recalled for possible E. coli O157:H7 contamination. At the time of the recall, there had been no confirmed reports of adverse reactions due to consumption of these products, according to the recall information posted on the USDA website.

The CDC is working with the U.S. Food and Drug Administration (FDA) and state health departments to investigate this outbreak which includes people who ate tainted greens at restaurants. The first illnesses were reported March 22 and now include 35 cases from 11 states with the following totals: Connecticut (2), Idaho (8), Illinois (1), Michigan (1), Missouri (1), New Jersey (7), New York (2), Ohio (2), Pennsylvania (9), Virginia (1) and Washington (1).

Those sickened range in age from 12 to 84 years old. The median age is 29. Most of the case patients, 69 percent, are female.

Two of the three cases of HUS are in Idaho, which has been particularly hard-hit with eight cases and three hospitalizations. All of those patients, who range in age from 20 -55, reported eating chopped romaine lettuce in the 10 days before they became ill.

This investigation is ongoing. If you or a loved one has an E. coli infection from contaminated romaine lettuce identified as the source of this outbreak and you have questions about a lawsuit for compensation and justice, contact the Bag Bug Law Team at Pritzker Hageman. Attorney Fred Pritzker and his team of food poisoning lawyers have represented people sickened in almost every major foodborne outbreak in the United States for the last 20 years.

Updated April 15 to include recall information.

Update April 21 to include expanded consumer advisory information from the CDC.