“We lost everything, but the amount of help we received from Fred and Eric and their law firm was incredible. No amount of money can replace what we lost. I went through 15 to 20 surgeries. But I’m still alive and I get to spend the rest of my life with my family and we’re going to be happy the rest of our lives.”
–a client who was burned on over 70% of his body

Attorneys Fred Pritzker and Eric Hageman made a positive difference in the life of the client quoted above. For Fred and Eric, it was an honor and a privilege to help this client and his wife through the worst time of their lives and get them a settlement large enough that they will never have to worry about finances again.

Burn Lawyer Helps You Get Money for Second, Third, and Fourth-Degree Burns

Our law firm knows about compensation for 2nd, 3rd and 4th-degree burns because we have won multi-million-dollar cases for clients with these severe injuries. In one of our recent cases, our client lost more than one limb from the heat of an explosion. Most of his hair was burned off and a significant amount of tissue on his face was destroyed. It is a miracle that he survived.

In a burn injury lawsuit, compensation may include money for the following:

If the victim does not survive, the the family may have a “wrongful death” claim.

One aspect of these cases is amounts for physical pain. Although no amount of money can make up for the horrific pain suffered, getting a significant recovery from a settlement or jury verdict holds corporate wrongdoers accountable and provides needed funds to the victim and his or her family.

The pain in these cases is incomprehensible. In many cases more than the skin is damaged. Fire and smoke can damage the eyes, lungs, brain, and kidneys. Hands, feet, arms, and legs can be so badly burned that amputation is necessary.

When someone suffers second, third, and fourth-degree burns in a fire or explosion, the settlement payout can be in the millions. There are several reasons for this, including the following: medical expenses, severe pain endured during treatment, permanent change in appearance (legally referred to as “disfigurement”), and loss of income. Settlements should include compensation for future expenses, pain and suffering, lost wages, etc. Our law firm helps people throughout the United States win lawsuit settlements from gas companies and other corporations.

A Lawsuit Holds a Company Accountable for Burn Injuries

In one of our law firm’s multi-million-dollar cases, our investigation found that the owner of an apartment building did not repair smoke alarms in the building prior to the fire. When a fire broke out, the fire alarm in one apartment did not sound. Two people died: a mother and her son. Two members of the same family survived, but the surviving daughter was severely brain damaged.

The landlord had a legal duty to maintain the alarms. When that duty was breached, we fought for justice and won. Other companies can similarly be held accountable:

One of the many things we do is find all of the companies legally responsible.

Our Burn Lawyers Have Access to the Best Expert Witnesses

These lawsuits can require the expert testimony of medical doctors, biomedical professionals, and engineers. Because of our past successes, our law firm has the resources to get qualified expert witnesses and pay for visuals that will make their testimony come alive in court.

Our lawyers understand the science behind these cases and have successfully used complex, science-based testimony of expert witnesses in court, in pre-trial motions, and during negotiation settlements. Our fire investigation lawyers have decades of collective experience. 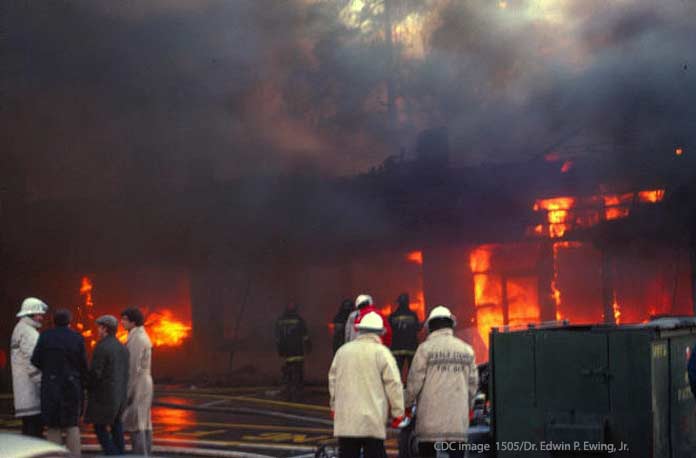 What Kind of Lawyer Should I Hire for Explosion Burns?

You should hire a lawyer that has won explosion cases involving severe burns and other injuries from the blast and fire. This is more than just having experience handling these kinds of cases. You want a successful lawyer who can win your case.

A lawsuit has been filed on behalf of a husband and wife who claim to have been seriously injured after a smoke detector in their apartment failed to work. Injuries include severe burns, smoke inhalation, kidney failure, and amputation.

Compensation usually includes medical expenses, loss of earnings, disability, pain and suffering, emotional distress, and any other amount that would be considered necessary to compensate for losses.

In a lawsuit “pain and suffering” would include any pain, disability, disfigurement, embarrassment, or emotional distress that the person has experienced up to the time of the verdict or will experience in the future.

When someone is injured in this way due to the negligence of another, that person can sue the negligent party and others who are liable under the law.

These are caused by substances such as acids, bases, and hydrocarbons.  The severity depends on the concentration of the substance, the length of exposure, and the type of chemical causing the damage.

When electricity passes through a resistant material such as the human body, energy is given off in the form of heat.  The extent of the injury depends on the size of the current, the pathway (i.e. head to toe, hand to hand, etc.), and the length of exposure.

In a significant number of these cases, bacterial infection causes partial thickness burns to become full thickness.  Infection of the wound area can lead to sepsis and septic shock.  Septic shock is extremely dangerous for the patient, because their blood pressure begins to drop rapidly.

Brain damage associated with fires is usually cerebral hypoxia (also referred to as cerebral anoxia), a condition where there is an absence of oxygen to the brain.

The most common source of fire-caused inhalation injuries caused by an asphyxiant are those caused by carbon monoxide.  Carbon monoxide (CO) is released during the burning of all organic materials.

A common asphyxiant associated with inhalation injuries is hydrogen cyanide.  It is typically produced from the combustion of polyurethane (foams), wool, silk, and paper, all of which are commonly found in homes.

Chemical inhalation injuries are highly varied and completely dependent on the toxin causing the injury, the concentration inhaled, and the length of exposure.  The size of the particles inhaled also affects the type of injury.  Larger particles remain in the nasopharynx and major airways.  Small particles that can diffuse easily can move into smaller airways and alveoli, potentially causing more severe damage than larger particles.

Inhalation injury occurs in between 2.5% and 15% of victims.  It can even be present if no burn has occurred, merely through exposure to inhalants.

Kidney failure is a major complication, particularly for thermal and electrical burn victims. Our lawyers are some of the very few in the United States who have successfully handled numerous kidney failure cases.

Children are particularly at risk for these. It only takes a few seconds to get severely injured.

We recognize the horrible pain and disfigurement resulting from gas explosion injuries and the legal and financial needs of survivors and their families.