The CDC and FDA have declared an end to two of three mystery E. coli outbreaks where romaine lettuce was the suspected source. The outbreaks remain unsolved.

Here’s how things ended up. A total of 32 people in 12 states were sickened in this outbreak, fifteen of them were hospitalized. One of them developed a form of kidney failure associated with E. coli infections called hemolytic uremic syndrome (HUS). One person died.

The people sickened, who range in age from 2 to 75 years old, reported the onset of symptoms on dates ranging from June 6, 2020, to October 25, 2020. They reported eating a variety of foods. Several of them ate at the same restaurant and had eaten multiple common food items. The FDA conducted traceback investigations for several of these items and was unable to identify a common source of contamination. Likewise, CDC investigators were unable to identify a common food item based on food histories the patients reported during interviews with health officials.

Since the last update of this outbreak on November 10, 2020, it expanded to include three additional states and six more illnesses. So, at the time the outbreak was declared over, 18 people in nine states had been sickened and six people had been hospitalized. 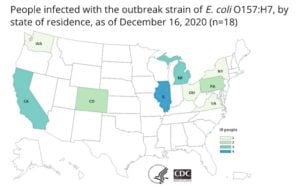 One recall was issued in association with this outbreak. On November 6, 2020, Tanimura & Antle romaine lettuce was recalled after the outbreak strain was identified in a single-head package. But, according to the CDC, investigators were unable to determine if any illnesses were linked to this product. None of the patients who were interviewed specifically reported eating the recalled product and some people got sick before the “packed on” dates for the recalled products.

The FDA conducted traceback investigations and conducted inspections at several farms. However, the findings did not link the farms to the outbreak.

If you developed an E. coli infection from contaminated food and would like a free consultation with an experienced E. coli lawyer, please contact our E. coli Legal Team. We have represented clients in every major E. coli outbreak in the U.S.  You can reach us by calling 1-888-377-8900, sending a text to 612-261-0856, or by completing the form below. The consultation is free and there is no obligation.